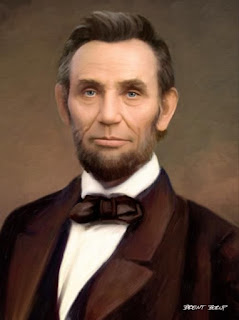 Abraham Lincoln on his first day in office as President of United States of America entered the hallowed chamber to give his Inaugural Address. A Rich Aristocrat stood up and said: “Mr. Lincoln, you should not forget to tell us that your father used to make shoes for my family”…. And the whole Senate laughed.

They thought they had made a fool of Lincoln… But certain people are made of a totally different gene. Lincoln looked at the man directly in the eyes and said: “Sir, I know that my father used to make shoes for your family, and there will be many others here too, because he made shoes the way nobody else can. He was a creator. His shoes were not just ordinary shoes because he poured his whole soul into them. I want to ask you, have you any complaint? Because I know how to make shoes myself. If you have any complaint, I can make you another pair of shoes. But as far as I know, nobody has ever complained about my father’s shoes. He was a genius, a great creator and I am proud of my father”.

The whole senate was dumbstruck. They could not understand what kind of man Abraham Lincoln was. He was proud because his father did his job so well that not even a single complaint had ever been heard.

Remember, no one can hurt us without our consent. It is not what happens to us that hurts us, it is our response that hurts us. There are people out there whose only job is to hurt others. Don’t give them a reason to have so much work on their hands. Don’t ever LET any man/woman on this earth ever intimidate you or whatsoever.  Be proud of who you are and never ever be like someone else.